Based on styryls, squaraines, benzanthrones, and naphthalic acid derivative a series of new fluorescent dyes that are
sensitive to the microenvironment, including pH, hydrophobicity, polarity, and the presence of proteins were developed. These dyes are promising fluorescent bioanalytical reagents, probes and labels with improved characteristics for clinical diagnostics, biomedical and pharmaceutical assays. These new materials are used to study the intracellular pH, albumin, red blood cells, and cell membranes, including fluorescence imaging applications (Fig. 2). The fluorescence lifetime immunoassay (Fig. 2) and hybridization assay (Fig. 3) were also developed based on these dyes.

The quaternizated 1,3-diazine ring formation qualified as a particular case of the t-amino effect has been found under conditions of the Vilsmeier formylation of aromatic dialkylamino derivatives (Scheme 1). The reaction can be associated with the two-step heterocyclization in the intermediate Vilsmeier adduct. Mechanism of the heterocyclization has been investigated experimentally and theoretically, using semi-empirical quantum chemical simulations. This reaction has opened up a convenient way to synthesize novel water-soluble, highly-bright fluorescent dyes for various practical applications in particular biomedical assays. 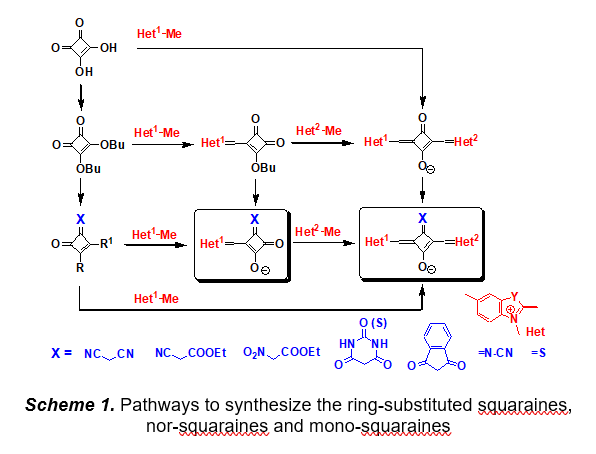 Scheme 1. Mechanism of the heterocyclization

Reactions of squaric acid, dibutyl squarate and mono-squaraines with CH-acidic compounds, nitrogen containing heterocyclic methylene bases, cyanamide and thionating reagents have been investigated (Scheme 2). As a result, preparative methods for the synthesis of practically important squaraines and nor-squaraines were developed and the novel highly bright and photostable fluorescent dyes were synthesized. Correlations between spectral, photophysical and photochemical properties and the molecular structure of these dyes were obtained. 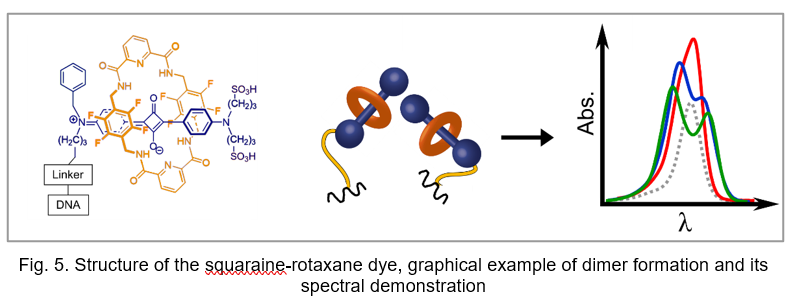 Novel water-soluble cyanine and squaraine dyes. A series of monoreactive, water-soluble, squaraine dyes with two aromatic sulfo groups and up to 3 sulfobutyl groups was synthesized and the spectral, photophysical and photochemical properties of these dyes were compared to dicarbocyanines of the same structure. Compared to cyanines the squaraine dyes absorb and emit in aqueous solutions at shorter wavelengths (630–636 nm / 639–645 nm vs. 647–653 nm / 665–672 nm), have higher molar absorptivities (284,000–333,000 M–1 cm–1 vs. 242,000-260,000 M–1 cm–1 ), lower fluorescence quantum yields (4.3–9.4% vs. 27–32%), and lower fluorescence lifetimes (0.2–0.3 ns vs. 1.0–1.2 ns) but the quantum yields and lifetimes substantially increase when bound to protein (BSA) or antibody (IgG). Compared to cyanines, squaraine dyes exhibit higher photostabilities and much higher sensitivity of the quantum yields and fluorescence lifetimes towards the microenvironment and are therefore better suited as biomedical fluorescence sensors. Sensing the Microenvironment. Red and NIR probes and labels of Seta and especially Square series show noticeable increases of fluorescence intensity and longer fluorescence lifetimes in presence of large biomolecules such as proteins and lipids. Fluorescence intensity increases of up to 100 times and higher were observed. The fluorescence intensity of dyes such as K8-1355, K8-1431, K8-1440, and K8-1500 substantially increases upon binding to BSA or other large biomolecules. The quantum yields for some of the non-covalent complexes of these dyes with BSA are as high as 80%. Therefore these probes are perfectly suited for fluorescence-based quantification of proteins. Because these dyes readily stain cells of different nature they are also useful for in-situ biological imaging. Furthermore they are useful as stains for gel electrophoresis. Due to the fact that the protein binding constants of these dyes are comparable to those of some common drugs, they are used for the assessment of drug-binding constants by the dye-displacement method.

pH-Sensitive Labels for Biological Applications. A series of pH-sensitive long-wavelength labels of the Square and Seta series with tunable pKa's in the range between 7.17 and 10.29 was developed and investigated. Protonated forms of the free dyes absorb between 640–693 nm (long-wavelength absorption maximum) with extinction coefficients (ε) 87,000–188,000 M–1 cm–1 and fluoresce between 656–714 nm. Due to reversible deprotonation in basic environment the long-wavelength absorption band of these dyes decreases and a new absorption band at 514–557 nm appears whereby the fluorescence of almost all known dyes is totally quenched. Remarkably, both, the protonated as well as deprotonated forms of K8-1405, are fluorescent. This dye was found to be most important marker for pH-sensing applications because its pKa is in physiological range and both protonated and deprotonated forms are fluorescent. The reactive pH-sensitive labels can be easily coupled to antibodies and other proteins using standard procedures. Potential applications of the developed pH-sensitive labels are in biological, pharmaceutical and biomedical research, clinical diagnostics, and high-throughput screening for the investigation of biological cells, membranes, and the role of intracellular pH in diverse physiological and pathological processes. Probes for Fluorescence Lifetime Imaging and Homogeneous Fluorescence Polarization Assays of High-Molecular-Weight Analytes. A new series of the long-wavelength Seta dyes has been designed for the fluorescence lifetime (FLT) and polarization based assays. These dyes have low FLTs (less than 1 ns) in aqueous solution in the unbound state but these FLTs significantly increase (up to 4 ns) after binding to proteins. We have also developed blue and green fluorescent FLT probes and labels of SeTau series such as K1-204 and K7-545. Selected dyes of this series have FLTs up to 32 ns in aqueous solutions. SeTau dyes are perfectly suited for use in homogeneous fluorescence polarization assay of high molecular-weight antigens. The figure on the right shows the changes in fluorescence polarization of K7-545-labeled BSA (MW ~ 66 kDa) upon titration with anti-BSA (MW ~ 150 kDa). The labeled BSA species has still a relatively low polarization of 165 mP and only upon addition of specific antibody the polarization increases gradually to its final value of 335 mP, which demonstrates the usefulness of this label for the measurement of high-molecular-weight antigens in a Fluorescence Polarization Immunoassay (FPA). Dark Quenchers for the Fluorescent Resonance Energy Transfer (FRET) Applications. New reactive Super Quenchers of the SQ series such as K8-1649, K8-1902 and K8-2602 absorb in the 500–800 nm spectral range with high extinction coefficients. They exhibit no residual fluorescence and are perfectly suited for covalent labeling of proteins, peptides and oligonucleotides for use in FRET and real-time PCR based applications. These dyes are available as amine-reactive NHS esters and thiol-reactive maleimides. Thus the reactive label K8-2602 has broad absorption band between 600–800 nm with maximum at 756 nm in water and extinction coefficient as high as 200,000 M–1 cm–1 .