Highly stable nanomaterial based on ferromagnetic nanoparticles dispersed in a thermotropic liquid crystal is developed. The long-term colloidal stability and homogeneity were achieved through surface modification of the nanoparticles with mixture of dendritic oligomesogenic surfactant designed and synthesized in the department and hexylphosphonic acid. The nanomaterial has an increased sensitivity to the magnetic field 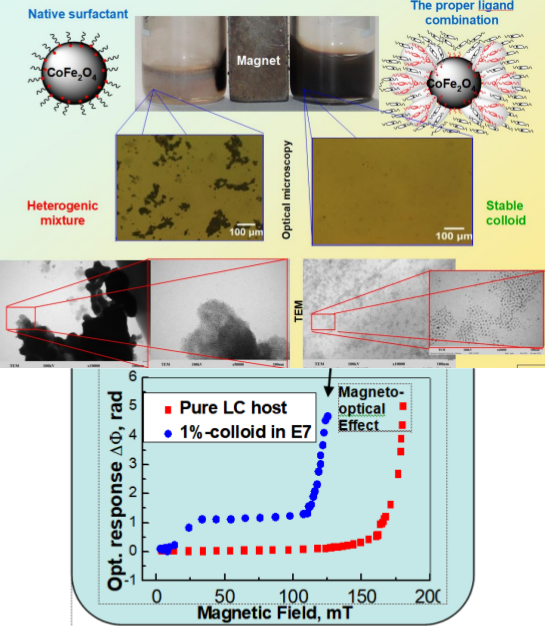 A number of surfactants (ligands) which allow obtaining of stable colloids of spherical magnetic and semiconductor nanoparticles (NPs) in a liquid crystal (LC) medium is designed and synthesized. The most stable dispersions are obtained using surfactants comprising dendrite promesogenic moieties. Coating of the magnetic NPs with the mixture of dendritic promesogenic ligand and short alkylphosphonic acid allows us to produce highly stable magnetically sensitive colloids in a nematic liqud crystal. High concentration of the nanoparticles in “truly” dispersed state results in decreasing the Frederikscz transition magnetic field by 35% in comparison with the undoped LC. The effective coupling of the spherical particles with the LC director is a result of the arrangement the particles in chains which is supported by TEM and the magnetically-induced birefringence in the isotropic phase of the LC colloid. The proposed approach for the stabilization of magnetic nanoparticles in thermotropic liquid crystals opens a way for development of magnetically-addressed LC devices such as information boards, E-paper etc. 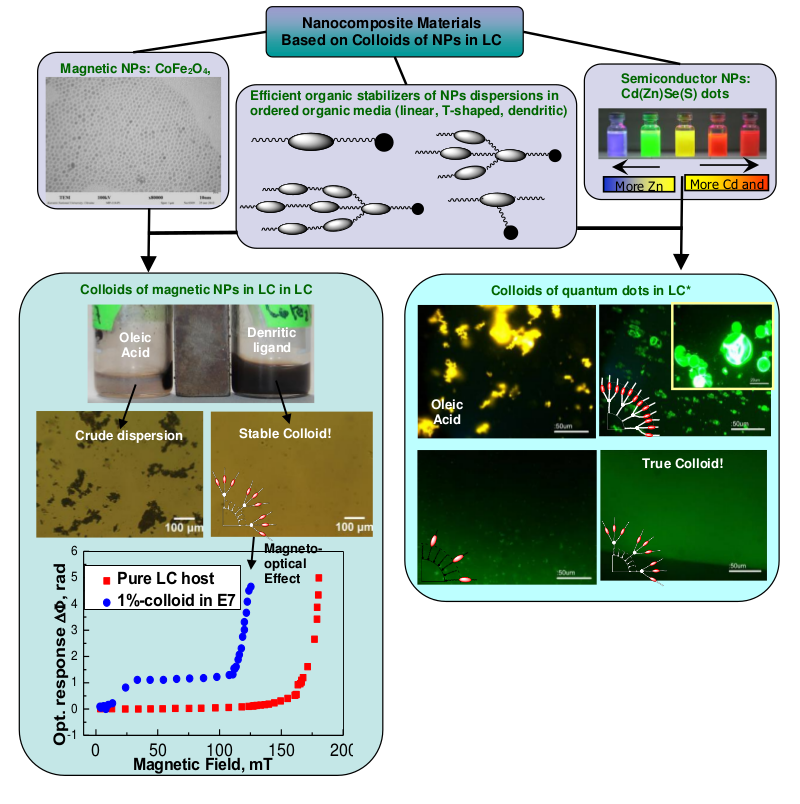 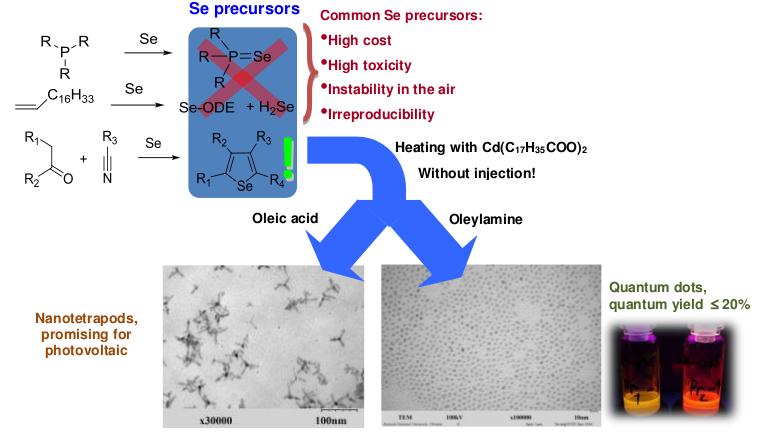 With the use of chiral components S-FOTDA-6 and SR-LACTAF-6 designed and synthesized in the department, unique liquid crystal (LC) material is developed which forms an antiferroelectric smectic mesophase in wide temperature range (–2 through 77 °С) and displays new effect of deformed helix antiferroelectric liquid crystal (DHAFLC) with response time T0,1—0,9 ≈ 65—70 μs, contrast ratio 1000:1 and weak temperature dependencies of the molecular tilt angle and light transmittance at temperatures lower than 45 °С.

With the use of chiral component S-FOTDA-6 designed and synthesized in the department LC material is developed which displays Kerr effect in the vertically aligned deformed helix ferroelectric liquid crystal (VADHFLC) with the highest known Kerr constant (К kerr = 130 nm/V2 ).